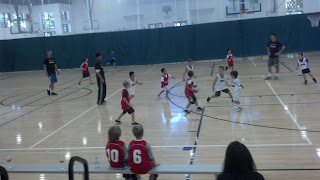 I just spent an entire season trying to teach Isaac not to duck every time the ball comes to him (and also to run - rather than skip - down the court).

I found out at the pizza party (to which I was not invited) there was great controversy, basically because of Isaac. Some of the dads were angry because at the last game, the "championship" game, all the kids were allowed the chance to play (not just the best players). Apparently, parents felt the "championship" game was not serious enough - not real basketball. The coach actually sent out an email apologizing for it.

The thing is, that last game of the season was Isaac's best game. It was also the first time I have seen him actually try to shoot. Yes, he shot at our team's basket. But he didn't make the shot anyway, so does it really matter? I was proud of him. I was proud he tried and I was proud to see him summon the courage to get out there but they were probably talking about that incident at the pizza party too.

I know some of this may be my own insecurity. I played sports my whole life but I was never very good. And by never very good, I mean I sucked. At most of them anyway. If there were a Hall of Fame for benches, my face would not be in it. The imprint of my ass would be. But I still played a lot of sports. More importantly, I was a great team-mate and an enthusiastic supporter. And I passed the ball a lot.

Here is the other thing. Some of my kids did not develop typically. They walked late, had an unusual gait and do not have the coordination of other children. I think if other parents understood that, they might be more sympathetic than they are. But maybe not. I don't know.  And it doesn't matter anyway. All my kids play sports - all of them. And they play sports even if they suck. They play sports because I believe a person's body and mind are connected. I also believe that sports are part of growing up as a person and living honorably and fully in the world with other people.

Not all our kids are going to make varsity. But these kids  are K through 2nd Graders. In a few years, there will not be a chance for recreational basketball, it will all be varsity. Btw, this wasn't even a school league, it was just a private group. You pay $180, practice nine times and then have a "championship" game against the other half of the private team. So why are we pushing the kids now? Why are parents disappointed the championship game wasn't a "real" game? Is the goal to teach children how to play a "real" basketball game? Or is the goal to teach children basketball skills, how to be great team-mates and how to be enthusiastic supporters?

Tiger parents - I was once one of you. All these children are precious. Let's dial it back a bit.

Email ThisBlogThis!Share to TwitterShare to FacebookShare to Pinterest
Labels: Demise of the Tiger Mom, Developmental milestones, moms who don't fit the profile, reluctant demise of the tiger mom