I'll say it again. International adoption is not a solution for the crisis of poverty in Africa. But for these 41 children, now with their families, it is the best possible thing. 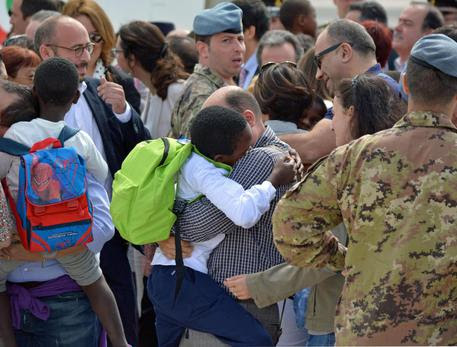 (ANSA) - Rome, June 1 - A group of 41 Congolese children who were adopted three years ago by Italian couples flew in to Rome's Fiumicino Airport at dawn on Wednesday, a committee of adoptive parents said.


Seven Italian couples were waiting for them, but the children were not allowed to meet their parents right away due to red tape, the committee said.

Another couple had not been told their adoptive daughter was on her way, and set off this afternoon from the city of Brescia in Italy's northern Lombardy region.

A group of just 25 children was initially expected, she added.

"Eighteen still remain in the (Democratic Republic of the) Congo (DRC) - the last children who are still waiting to embrace their families," Pavoni said.

The chair of Italy's international adoptions commission said in March the DRC had cleared another 47 adopted children so they can join their new parents in Italy.

"This is truly good news. We express great joy and satisfaction".

On March 8, the DRC authorized 66 adopted children to join their Italian parents.

Another 14 adopted children were authorized to leave the African country in mid-February.

In November 2015, the DRC approved the adoptions by foreign families, including Italians, of 69 children after a two-year wait.

In May 2014, an Italian Air Force jet carrying 31 Congolese children adopted by families in Italy arrived from the Congolese capital of Kinshasa, marking the happy conclusion to a protracted ordeal.

For eight months, 24 Italian couples had been unable to bring their adopted children home from the DRC despite completing the adoption process, due to lack of final clearance by Congolese authorities.

The government in Kinshasa in September that year suspended permissions on all international adoptions citing suspected irregularities, but admitted that none of the procedures in question concerned Italy.   ALL RIGHTS RESERVED © Copyright ANSA
Posted by Paige Rachel Winikoff at 4:53 AM