Ethiopian adoptees and the crisis of culture 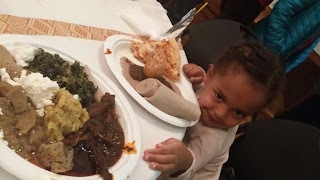 We were blessed this week by an unexpected invitation. Addis Kidan, an Ethiopian Church in San Francisco, threw open its doors and invited local families who have adopted Ethiopian children to come for Orthodox Christmas (celebrated in January).

The truth is, we have been starved for Ethiopian culture and the chance to spend holidays with Ethiopian families (any holidays actually - we are not even Christian :). It's funny now when I think about the innocence of my early dreams. I had been fascinated by Ethiopia since my time studying in Israel decades earlier. I thought, when we made the decision to adopt, that we were inviting part of the people and country we had grown to love into our lives. Somehow it would be a natural part of our family. The reality, of course, was much more complicated.  After Kulani came home, I tried to find Ethiopian families and rekindle friendships with their children. But it didn't work out that way. The whole situation was awkward for a lot of reasons. People did not know what to do with us.

Maybe I was having a Dolezalial crisis of identity or maybe I need to explore what part of my consciousness is affected by my own ethnocentrism. It is ridiculous to think we would adopt a child from another country and then have some kind of international presence in our family, especially in light of what I now understand about inter-country adoption. I would not change a single thing and would do it all over again a hundred times. But it was hubris to think that because Kulani became our daughter, our family would suddenly be part Ethiopian.

But as far as the crisis goes, I did not see this coming. I actually go back (with and without Kulani) as often as possible. She even had two passports until they figured it out at Bole Airport and confiscated her Ethiopian passport on our last trip. But the truth is, as much as I wished Kulani to have a dual identity, she is no longer Ethiopian. She does not look Ethiopian - her clothes, her mannerisms, her language, her gait and of course the fact that she is hanging out with me - all give her away as an outsider. She is American now and it is obvious.

Looking back, I remember with new awareness an experience we had at our first Court hearing in Addis. The judge asked me whether the culture of our daughter's birth was important to me and whether I had plans to help her experience and embrace her identity. In my excitement and pride of research, I told her there was a large Ethiopian community not far from where we live. I told her about my plans to make connections with Ethiopian families and my hopes to make friends. She looked up sharply from her papers and said "No, I mean with other adopted children."

The truth is, by the time she was old enough to have meaningful friendships, Kuleni's Ethiopian friends - all of them - were other children adopted internationally. We adoptive families only had each other. We never really talked about it like that, but that's all we had. We got together once a month or so to prepare Ethiopian dishes we learned to make on the internet. We signed our children up for "Habesha" dance classes, tried to remember the few Amharic words we could pronounce, traded secrets about hair care and raised money for things. It was hardly the embrace of globalism of my dreams.

So when Addis Kidan reached out to us, I was thrilled. It wasn't just me, either. It was everyone apparently because there are only 50 or 60 people in the church but they had to close the Evite after 100 people RSVP'd. I think every family in the Bay Area with adopted Ethiopian children came to the party.

The part I love most about this is how much luck and circumstance when into the whole gathering. It was so random. One of our members started dropping her daughter at the church for a teen group that meets there. The Pastor looked outside, noticed a white woman in the car and became curious. He was told that "oh yeah. Didn't you know? So and so is adopted..." He asked whether any of her friends would like to come to the church to meet the Ethiopian families and ... well... Yes!  All of us!  :)