About the mom profile

The 'Other' Kind of Mommie

Kulani is almost 16 months and still she has no words. I am a little bit worried about her developmental progress. But everyone says that when she does start talking, it will be in complete sentences. I am pretty sure the first one will be "I have to check my email."


Demise of the Tiger Mom

Honey, please don't be so sad. Somebody has to come in last and those kids were really fast. Anyway, we just need a new strategy. You don't have to swim fast. You just have to swim smarter.

Next time, when you are up on the block, look to your left and look to your right. Call out  "I can't hold my pee"  loud enough for them to hear. They'll back off.

I settled three cases last month so I don't have much work now. I thought maybe I should spend some time with the kids. You know, really concentrate on them. They missed me after the 70 hour weeks I was putting in over the summer.

So, it's been three weeks (so far). I thought I was doing okay. Sure, I freaked out a little sometimes. There was the time I dropped Isaac off at camp without shoes and told him he was just going to have to deal with it. And there was the first day of school, of course, when I forgot to pick up one boy at 12:20 and then the other at 2:05 (I know, right? Both of them? Those were embarrassing phone calls). Oh, yeah and then there was that grocery store incident. I nearly forgot about the grocery store incident. And maybe this week I called David three, four, sometimes five times a day at work telling him I couldn't take it anymore. But seriously, I didn't think it was that bad. Then last night I told David that I think I should go back to work and he said "After the way you were yesterday and the day before that and the day before that, I would PAY someone to employ you."

Kulani pointed to this picture in People Magazine and exclaimed "Mommie!"

How cool is this?  Kulani doesn't just think I look like Gwyneth Paltrow.  She thinks I am Gwyneth Paltrow.
This is great on so many different levels I don't even know where to start. But I do need to say something very important. "Pepper, listen to my words. I know Robert Downey Jr. is cute. Really cute actually. But you just can't rely on him. We have been through this so many times with Ironman I, Ironman II and now Ironman III. There were the rockets launched at your house, the kidnapping, the bondage, the 200 foot drop into a fiery pit. You can't afford to be hanging out perilously on an oil rig which is about to explode in stretch pants and a sports bra. Next time--for Ironman IV-- keep the suit." 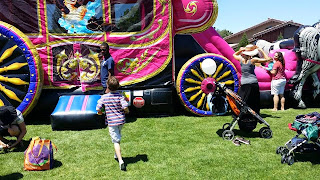 Of course you can go in, Isaac.  Boys are allowed in the the princess jumpee.  But then when you come out, you will be a girl.

Why Do People Carry Diaper Bags?

At the playground, one of the mommies was frantically riffling through her diaper bag looking for a diaper.  She was obviously distraught.  "I only have Size Two diapers in here!  I need a Size Three diaper!" Apparently she hadn't changed the diapers in her bag to fit the new size of her growing baby.

I try not to judge other mommies because I know what it is like.  We are all just trying to get by. And to be honest, we are all a little crazy.  But it's hard not to see this situation as a little ridiculous.  Kulani is my third kid, sure, but I never carried a gigantic diaper bag even with the first two.  It just seemed incredibly space consuming and inefficient--that built in changing pad, insulated bottle holders, two changes of clothes, and who knows what else there is in there.  I carry a purse. Sometimes there is a diaper in there. Sometimes there isn't.  Yesterday, I had a sock and a sanitary napkin.


Useful Advice I Have Given My Kids (That I Now Share with You!)

"Isaac, the secret to eating Goldfish in the bathtub is to dry your hands on a washcloth between each bite."

The Politics of Playdates

Do not ever initiate the play date because then you will feel obligated to have the play date at your house. The mom will drop her kid off and go shopping. Now you are stuck with both kids for the afternoon. You are basically free childcare. I can't believe it has taken me three kids to figure this out. 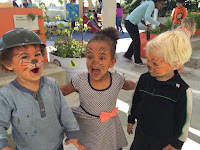 With the new kid at Isaac's school, however, I managed to get the play date at the other kid's house. Not only that, I asked the other kid's dad to pick them both up at school. Now I have the whole afternoon free. I do feel a little guilty about taking advantage of this first-timer though. And also I have never actually met the kid, nor do I have any idea who his parents are. Mostly, I am just worried they think I am that kind of mom, which of course I am. I'll offer to take the kids next time.

Other funny posts:  Moms who don't fit the profile