If you are Caucasian adopting from Africa, you are likely thrilled about how cute your child’s hair is. At the orphanage, her hair will be braided in perfect rows that look like you could plant rice in them. You will be thinking "I can't wait to get this child home and try a million different styles with her hair.” 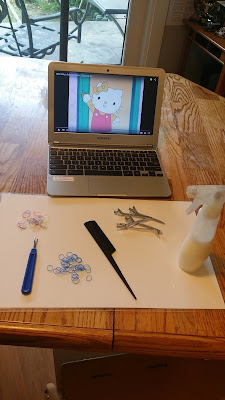 Whatever you were thinking ... let's just say they should not have let you out of the orphanage without a manual. Because your first few months are going to be hell. You have no idea how much time African American women spend on their hair. Take that number and multiply it by six because that is how long it is going to seem like to you.  At least at first.

Tools You Will Need


Here is what I have learned over three years 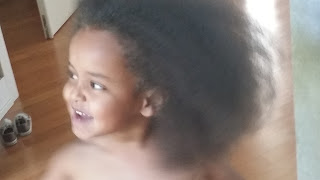 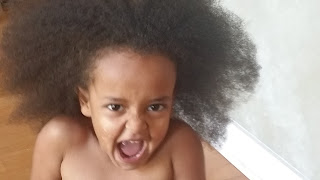 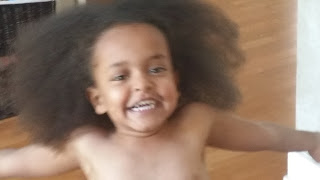 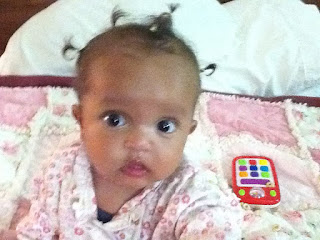 I put cute little snag free elastics around Kulani's head when she was a baby. She didn’t even need these really. It was just recreational on my part... 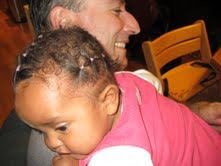 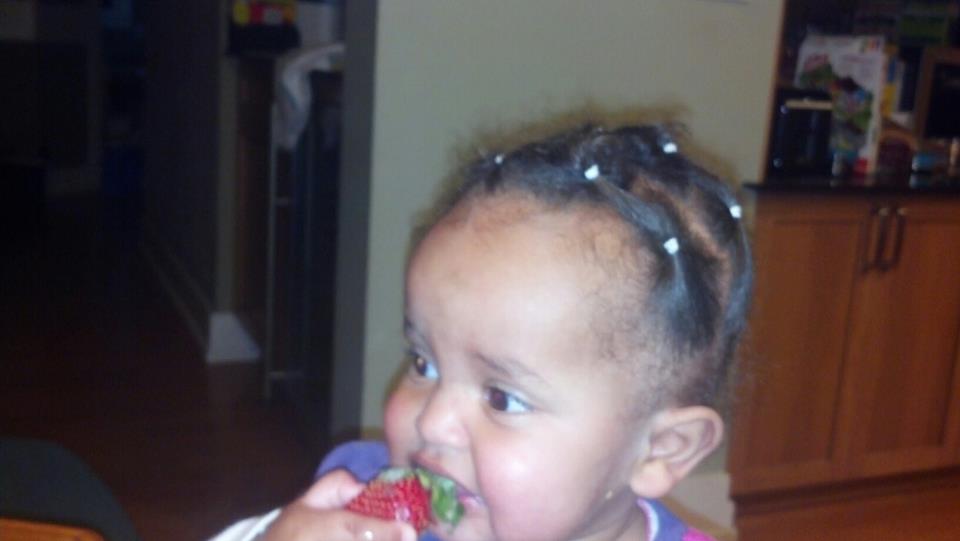 As she got older, Kulani started to need protection against tangling and breakage. I used the elastics a little piece at a time like french braids. Looking back, this style might have pulled the tiny hair in the side hairline too much. I would not do it now or maybe I would have fastened it closer to the hairline. 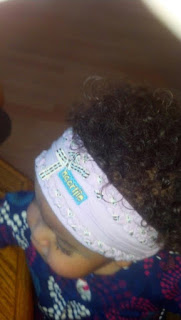 Kulani’s curls were very loose when she was a baby. I left it down sometimes with a lot of product and it was very cute. But I couldn’t do it often. In her crib, she would toss and turn and her hair would become tangled. Avoid unnecessary tangling. Which brings me to my next picture. 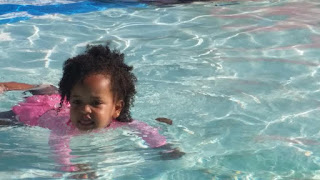 This is Kulani at the pool with her hair loose and down. DO NOT DO THIS. You will end up with a tangled mess and you will be looking at a solid week-end and 22 Hello Kitty videos to get them out. It is also important to note that pools dry out African hair so you should rinse her hair immediately after her swim and apply conditioner. I have heard people use double swim caps--a silicone cap on top and a lycra cap underneath--to protect their children’s hair as much as possible from pool water. 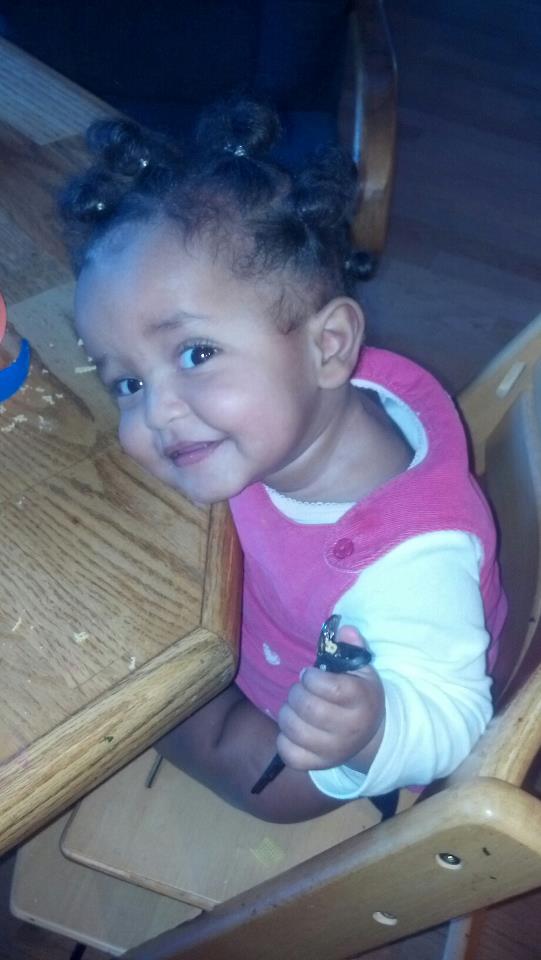 Kulani’s hair was starting to get thicker when she was here at about a year and a half but it was still kinky-curly (there are lots of different types of African hair Some people have much tighter curls). I sectioned it off in little areas, tied them with bands and finger curled the rest. Even with Kulani’s kinky-curly hair, you don’t need a band at the bottom of the braid, twist or curl. Just make sure you braid or twist all the way to the end and it will not unravel--it will stay that way for weeks. You can use the seam ripper to take out the elastic bands at the roots without damaging the hair when you take out this style. 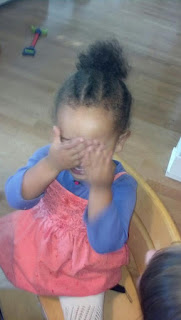 This is a single bun (ice skater look). This is a great, protective hair style because the hair around the hairline is protected by (french braids). It is an adorable look but it’s important not to do this (or any style too often) because that will stress or pull the hair. 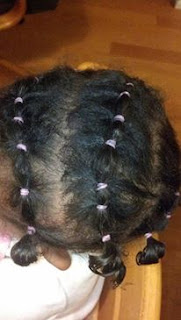 This is kind of like a french braid with elastic bands. The great thing about working with elastics is that they are easy to remove. You just use a seam ripper to take them out. I had not perfected the perfectly straight part at this point. See below improvements. 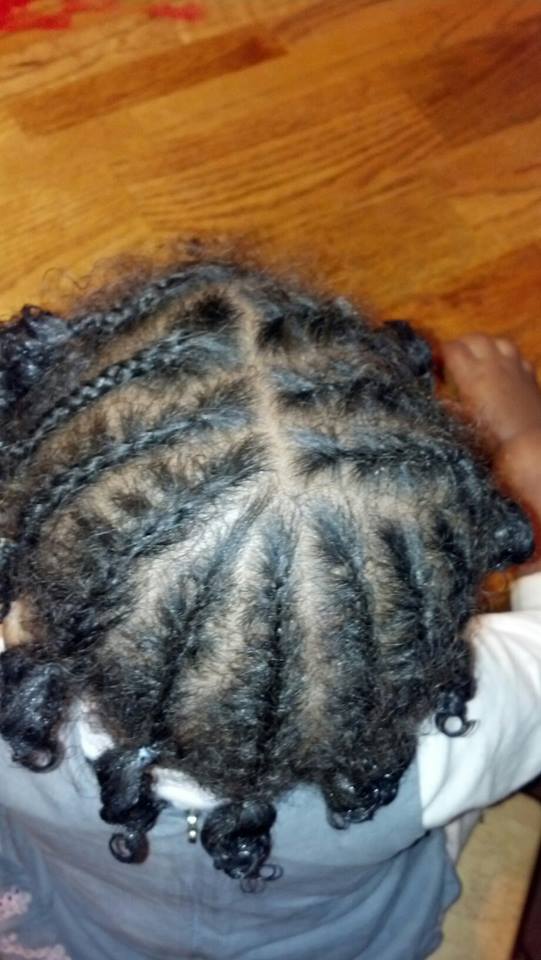 This French Braid style is in nice neat rows (more or less). As I was perfecting my craft, I realized how important the parts were. This style (and all of them really) does not require elastics at all. African hair just stays wherever you braid, twist or curl it for the most part. I just use elastics as placeholders. Note: You can also go the opposite direction with this style and put a bun at the top.  This is like an inverted version of the ice-skater look. 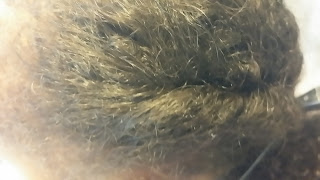 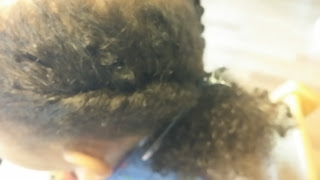 A single father from Haiti who has two daughters taught me this style which he describes as his “secret weapon”. He said it was the simplest and quickest protective hairstyle possible. He also told me that without it, he would never be able to get out of the house in the morning. You just put your thumb at the hairline and fold one small section at a time up over your other four fingers. Work your way in small sections folding the whole way until you get to the back. Do the same thing on the other side and secure the hair in the back with a bun, braids or twists. This style works best with tighter curls (more "afro textured") than Kulani’s because it stays in better. 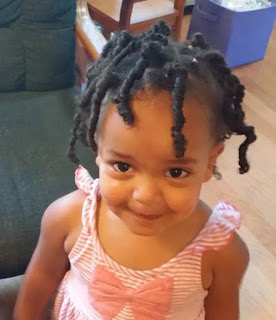 I hardly ever braid with three sections anymore. I almost always use two section twists. They are quicker and easier for the not-so-deft stylist. Also I like how they look.  You just separate the hair into two sections and twist all the way down (make sure you twist all the way to the bottom). People have asked me if you have to spiral each section in the opposite direction or something like that. The answer is no. You don’t have to do anything complicated like that. You don’t need the bands either. Like I said, I just use them as place holders. For this look, just section the hair off, divide each section into two parts and twist them around each other over and over to the bottom. It stays like that for weeks. I know. It is amazing. I also think two-section twists are also slightly easier to take out than braids when it's time to change the style. 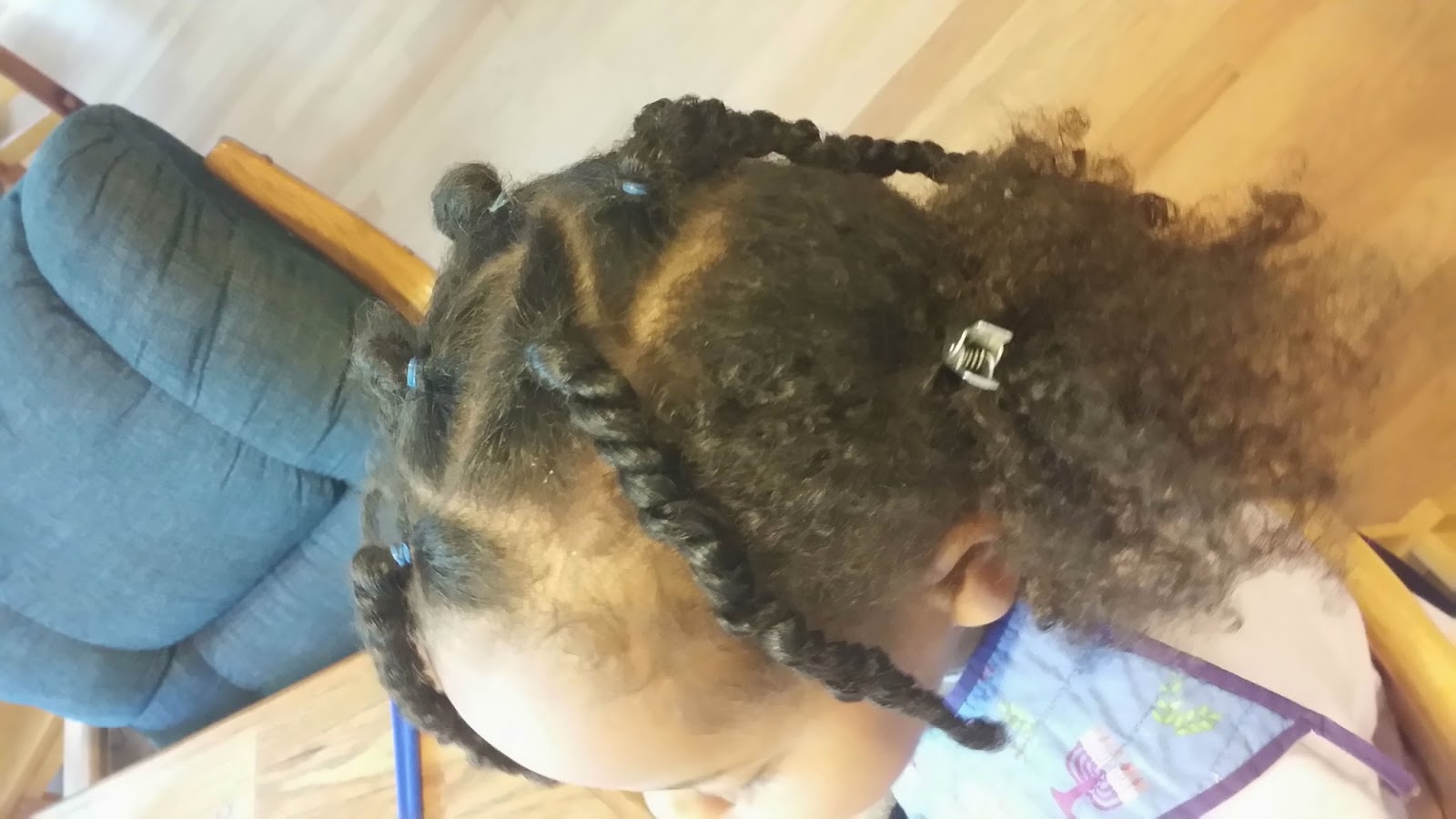 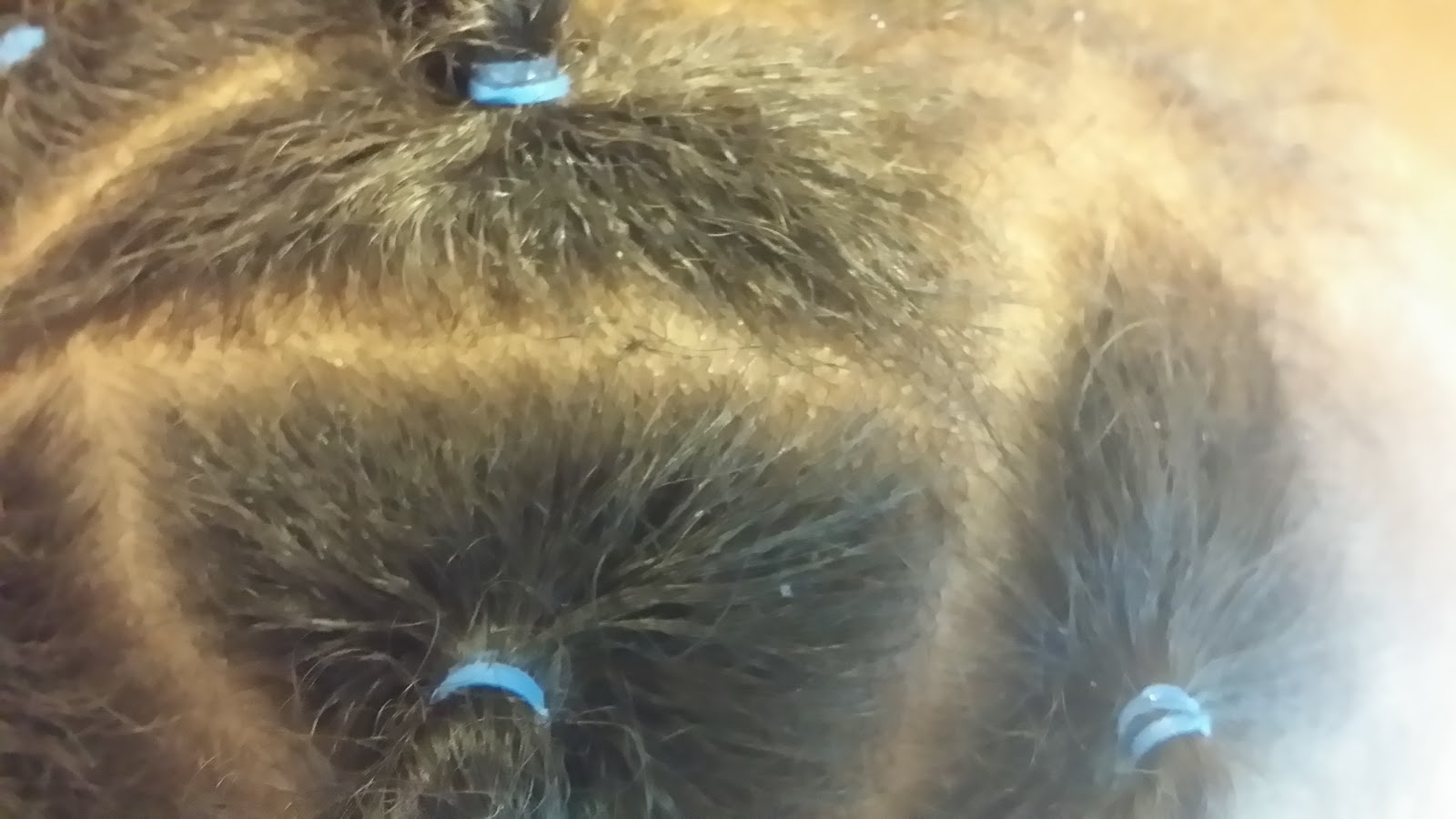 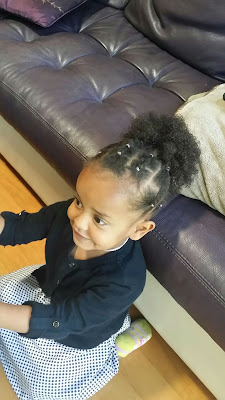 I use tiny snag-free elastic bands all
the time, primarily as placeholders for braiding. They are great because you do not pull on the hair when you take them out. You just cut them out (I use a seam ripper). Recently, I have started experimenting with bands instead of braids in some of Kulani’s styles. The reason I am trying this is because removing braids takes almost as long as putting braids in (and thereby exceeding my four episode Hello Kitty tolerance). Now that I have perfected my seam ripping band removal technique, I get the bands out quickly and easily. The styles are just as cute (see below) and easier to remove but I haven’t had enough time experimenting with this technique to know if the bands are as protective as braids for the hair. 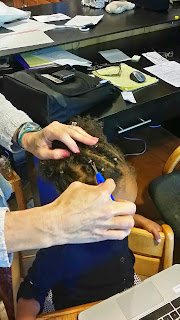 Kulani, almost four, has hair extensions. I was torn about it initially. Kulani’s Black hair is beautiful exactly the way it is. Hair extensions are controversial (under any circumstance) but they are especially charged in Kulani’s case because she is a Black girl growing up in an all White family. Hair extensions, like Kulani’s current pony, mimic “White” hair. It can be argued, of course, that they are a rejection of the beauty of Afro-textured hair. I reject this interpretation and in fact ... well ... there is a lot going on here but mostly ... it's Elsa. 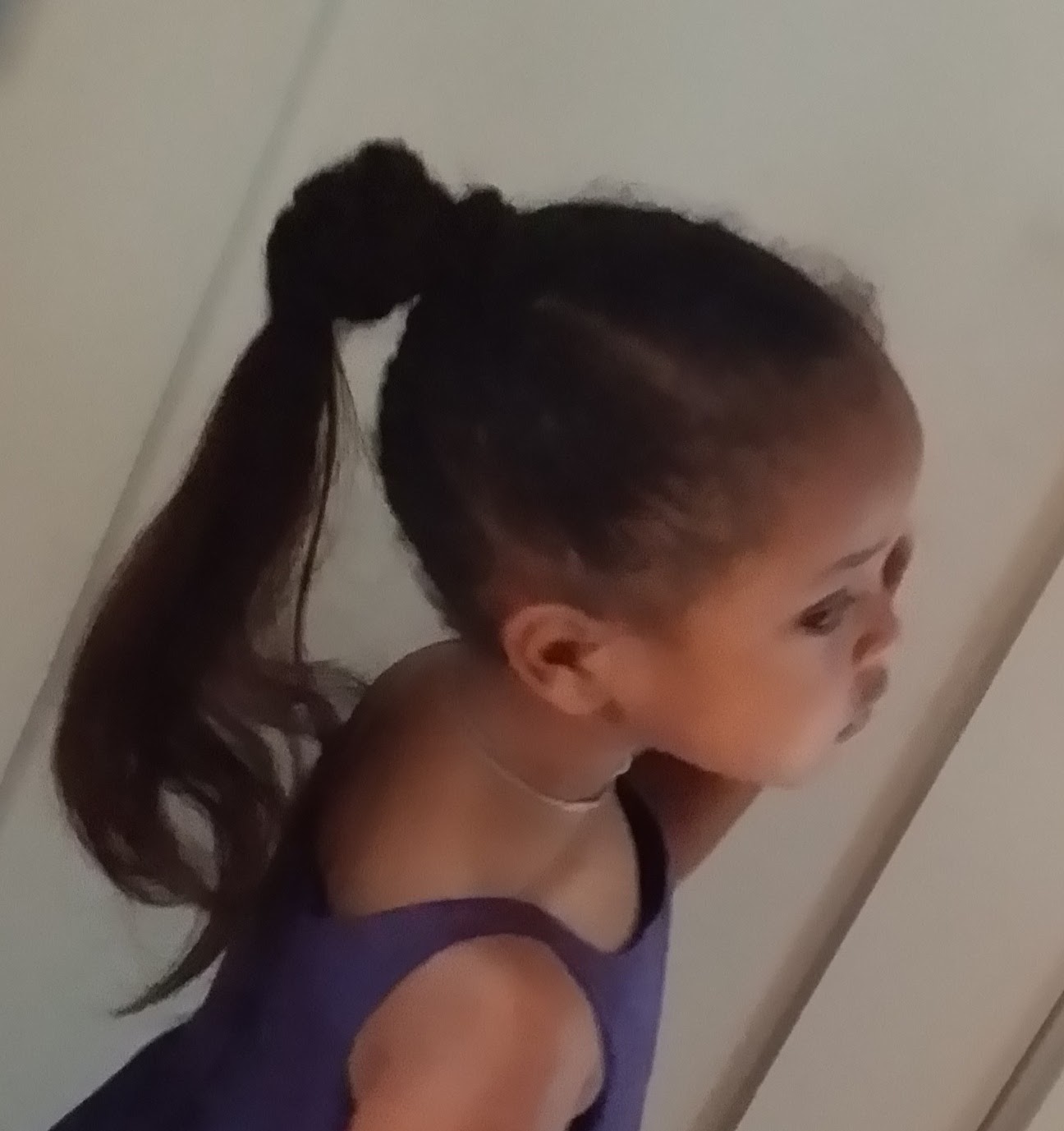 Here is what happened.

Kulani wanted "the Elsa Braid". (Ha! Who doesn't? I want the Elsa body--but we'll save that for another post.) Kulani will never have "the Elsa Braid" naturally. So I gave it to her. Believe it or not, I actually had these extensions lying around from a former time in my own life. They are a few inches of Remy (real hair) wefts in dark auburn color. I braided her hair and sewed them in. The style took me about an hour and a half. It lasts about ten days before it needs to be taken out, washed and redone or the style changed.

I guess when it comes down to it, I didn’t want to tell Kulani that because she is Black, she has to wear her hair a certain way. Kulani will one day make those decisions for herself. But some part of me knows I can’t tell her she can’t have “the Elsa Braid” because of a political agenda--even if someday she will understand the agenda to be her own. Anyway, this kid has a good head on her shoulders underneath all that hair. She approaches the Elsa braid she sometimes wears the same way she approaches the Elsa dress she now wears every Friday to preschool. The braid/pony extension is a dress up costume. In between Elsa styles, I am careful to encourage twin Afro Puffs and two-twist dangles she also wears that are a more common part of her cultural identity. Kulani's hair, like her personality and everything else about her is amazing with an almost unlimited potential for versatility, growth and adventure. She has a lifetime of exploration ahead of her.

How to get the style. 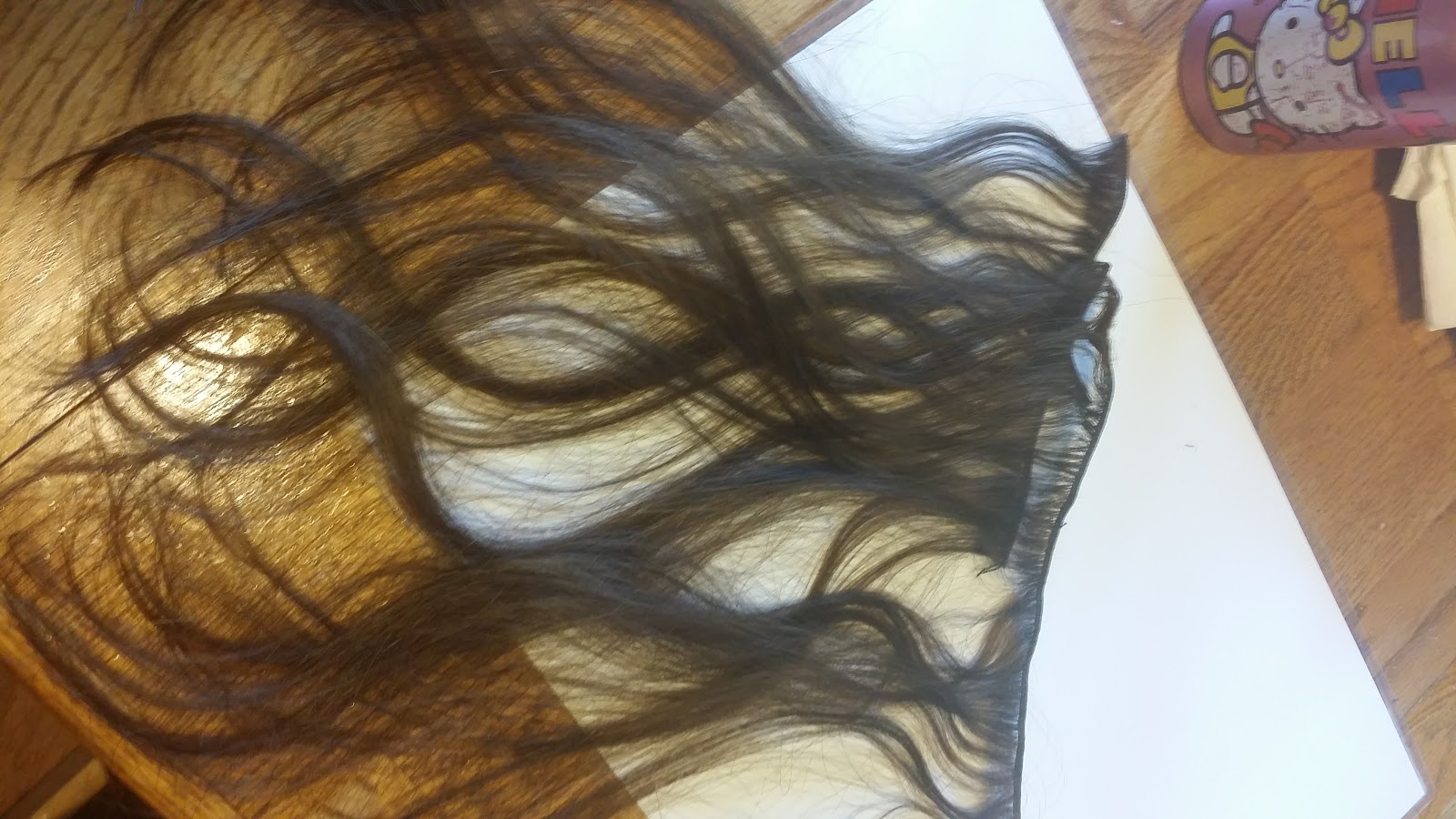 This is Remy (real hair) wefts in a dark color (not jet black). Black hair has a lot of colors but mostly it’s not jet black. I love International Hair Company www.inhairco.com (tell Craig I sent you). The hair is very, very good quality and lasts forever. It’s also real hair. Craig can help you match colors. If you use artificial hair, you must be careful because it is sometimes flammable or not resistant to heat--it can melt or be dangerous at high temperatures or with styling tools. 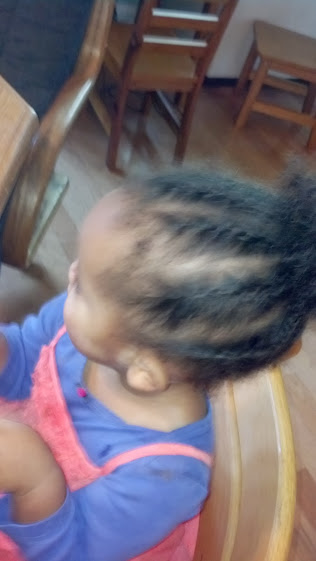 I tied up Kulani’s hair in an ice-skater style like the one shown above. I french braided it in eight neat rows to protect the baby hairs at the hairline and to give me a bun to work with at the crown. 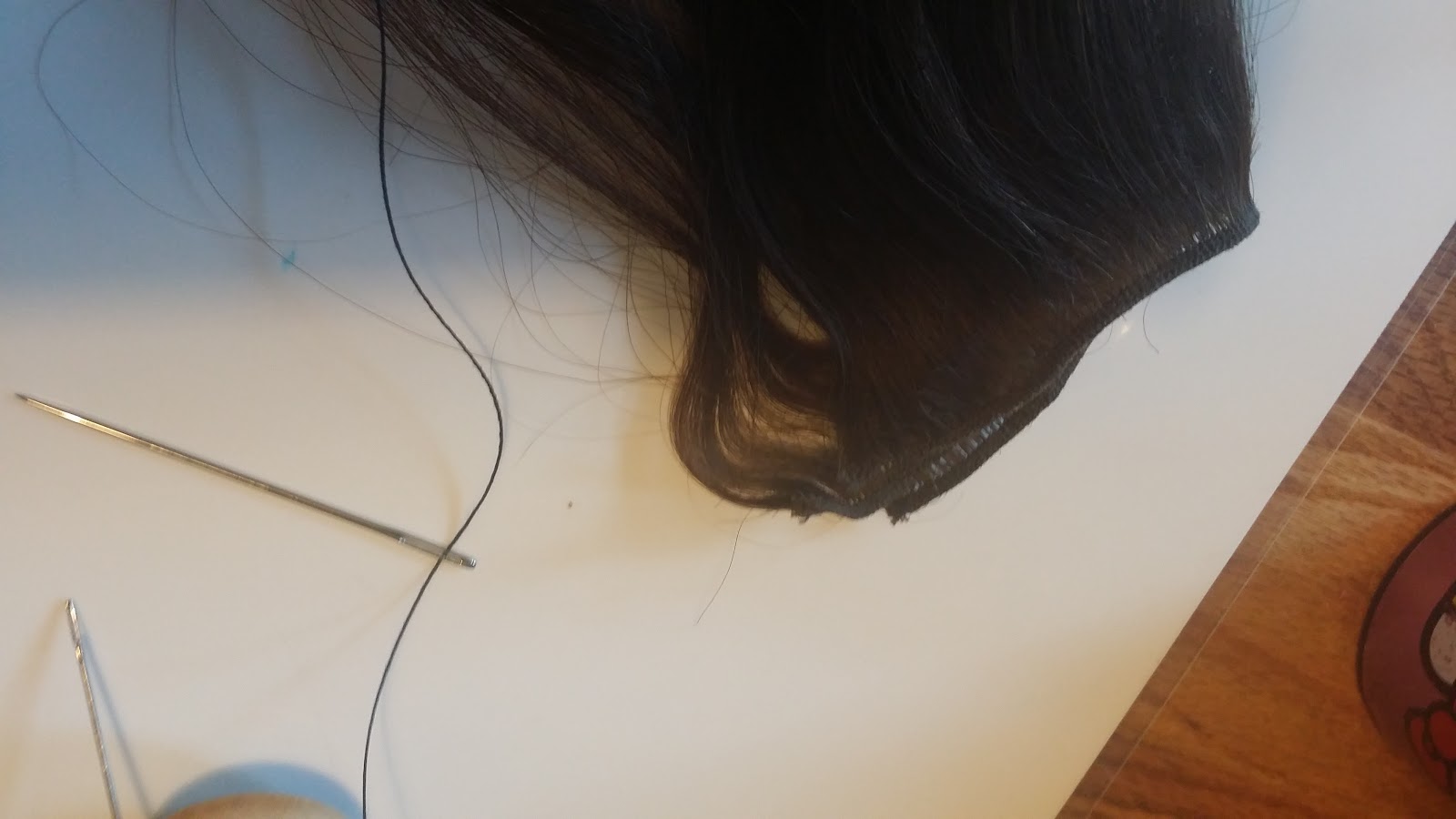 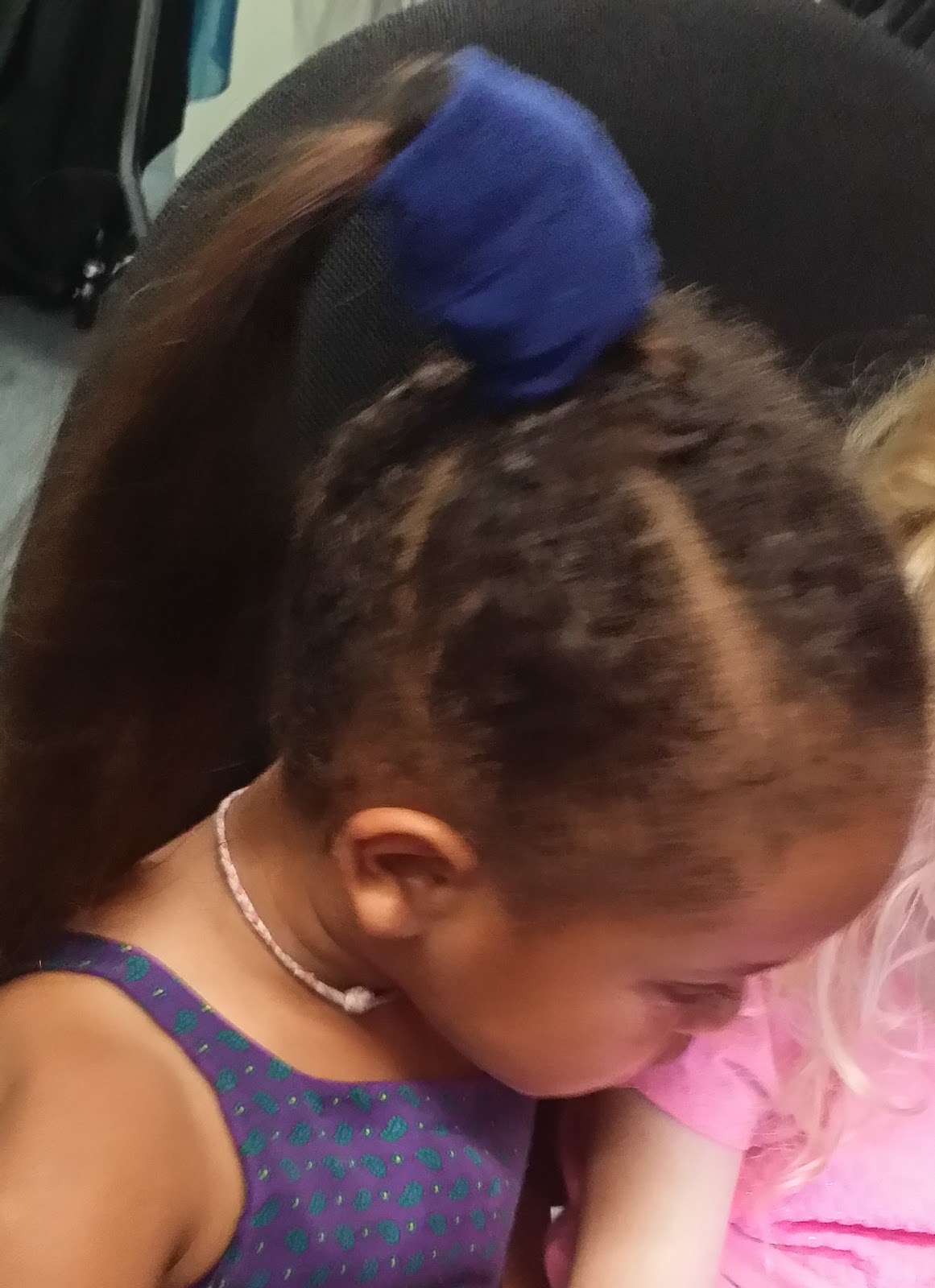 The style lasted about ten days. I braided the extension pony each night and during her naps so the extension hair would not get tangled in her crib while she was sleeping. In the mornings, I took out the braid and gave the pony a brush. Other than that, there was no maintenance all week. From a mommying standpoint, it frankly was fantastic.