What I learned from my preschooler today 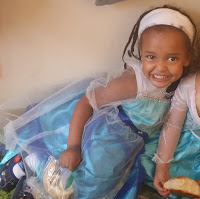 You can both be Elsa. One person does not have to be Anna. As a matter of fact, the entire preschool class can be Elsa if it wants to be. Last summer, there were several tense exchanges between Kulani and another three year old at the pool as they negotiated who would play the part of which princess (because someone had to be Anna). Now, whenever there is a girl at preschool dressed up as Elsa, Kulani is thrilled. She is happy because that girl is a kindred spirit (it is also an opportunity to prove to me that it is acceptable to dress that way).


It took me a long time to realize the significance of the whole Elsa phenomenon. But now I see it in a new light. You don't have to be unique or special or the only one of anything to be okay. You are precious exactly as you are. Just because each person is precious and a gift. So if there are 150 Elsas walking down Sherman Avenue on Saturday, it's cool. Each one of those Elsas is just as precious as the next 149. No one has to be Anna if she does not want to be and the fact that Elsa is absolutely - everywhere - does not make her any less precious.

It feels like such a relief - to me personally, actually. So much less exhausting. I recently realized I have spent a lifetime in chase - the pursuit of excellence. But it wasn't really a chase to excel, it was a chase to stand out. Because I felt like I had to be better or at least different just to be okay. It turns out you don't actually have to be somebody special to be somebody. You can just be.

With that said, in our family, there is only going to be one Elsa on Saturday. Because ... well ... yeah we are all precious. But G-d also created adult-sized Anna costumes and Amazon Prime. It's Halloween. That's different.

Related:  About the Mom Profile
Posted by Paige Rachel Winikoff at 11:12 PM

Email ThisBlogThis!Share to TwitterShare to FacebookShare to Pinterest
Labels: About the princess thing, moms who don't fit the profile