How to get into the Jedi training academy at Disneyland 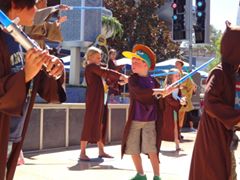 Note: The selection process has changed - this post is out of date... You can sign up now!

If you haven’t been to it, the Jedi Training Academy at Disneyland is cool. Kids are randomly selected from the audience, dressed in brown robes and trained to do combination moves on a training Lightsaber by a real Jedi Training Master. Then a disturbance in the Force is felt, a couple of Storm Troopers come out to secure the area, and Darth Vader appears. The kids fight him individually using the techniques they just learned and prevail momentarily. Then the kids realize they are even stronger as a group. Eventually, they join forces and vanquish the bad guys all together. Good prevails over Evil. The Universe is saved. It happens every single day on the Tomorrowland Terrace.

The problem with the "random selection" process is that some children like my middle son, Isaac, are seldom randomly selected. That is why I have carefully studied the random selection process at the Academy and why I am now writing this post...


The following is a true account of our experience.

Jedi Training was the only thing Isaac really, really wanted to do the whole Disneyland trip. Day after day, he went to the Jedi Training Academy and sat there politely with his hand up, hoping to be randomly selected. About half the kids got called each time. However by day five, Isaac was beating the odds. He had not been called--not even once. It's not that the Jedi Master is arbitrary or mean. It's just that he is working a big crowd and there are a lot of people. Isaac is kind of a quiet kid. Getting randomly selected, in this case, is more about getting noticed than about anything else. The kids who get noticed are the ones who are enthusiastically making a scene, wearing Disney stuff, are dressed in Star Wars costumes, carrying signs or who are jumping around. 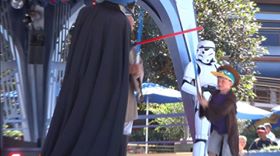 Our last day at Disneyland, I realized how important it was to Isaac to be a Jedi. He had sooo patiently sat through so many other Jedi in Training shows watching the other children after being passed over himself. So I decided I was going to make it happen. But I also had the other kids who wanted to go on rides and as usual, I was trying to make everyone happy. I sent the boys to Tomorrowland and waited in line for Dumbo with Kulani--thinking I would have enough time to get back and help Isaac (and also that I would be able to figure out some way to thwart the random selection process to get Isaac into the Academy).

Unfortunately, I was late. Kulani and I were just getting off Dumbo when we heard the Star Wars anthem come over the PA system. They were already roping off the Jedi training section of Tomorrowland. And I knew Isaac was just sitting there quietly with his hand up and a hopeful look on his face. He was going to be passed over again. So I went into a panic and I made a run for it. And when I say I made a run for it, I mean I tore across the park like a bat out of Hell wearing a sundress and Nike/Cole-Hahns. I jumped over the ropes. I actually hurdled the lower part of the Terrace and I cleared a couple of frightened looking dads who were sitting in the shade under the ledge.

Sure enough, the Jedi Master had already started making his selections "... and this daring young master with the Donald Duck shirt and the blue shorts ...". Just as sure, Isaac was sitting there quietly with his hand up. I approached, swooped Isaac up into my arms, lifted him into the air, and with great flourish shouted "PICK HIM! PICK HIM!" I practically threw Isaac onto the stage. In an instant, I was transformed into a shameless Jedi-in-Training Stage Mom.

The other parents did NOT appreciate my conduct, btw. The two dads' expressions changed from frightened to annoyed (also I tripped over them a little because I had to double back to collect Kulani who had hoisted her little body over the wall she tried to scale following me). But it worked. The Jedi Master acknowledged Isaac and randomly selected him (I think. In retrospect, I am not entirely sure whether the Jedi Master called him or whether I just told Isaac he had been called and pushed him onto the stage. It was kind of a whirlwind.)

But here is the thing. The look on Isaac's face when he was handed the training Lightsaber was one of honor and pride. In my lifetime, I will never forget that look. He wasn’t embarrassed. He was ecstatic. He didn't care if his mother was some crazy stage mom. Isaac was a Jedi-in-Training. 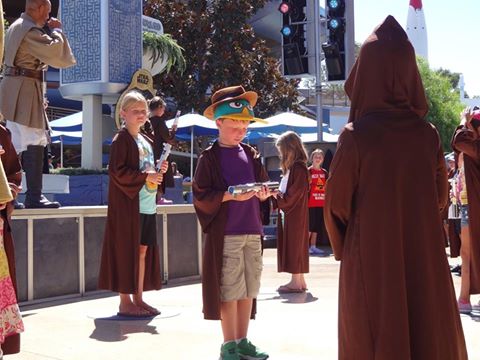 I would do it all over again. And you should too because the truth is, we will probably never see those people at Disneyland again and our kids will be way more embarrassed about way more important things we do later. I am not advocating parent craziness to beat out other children. I am not advocating that at all. The Force is strong with all children and they all deserve a chance to be Jedis. Part of being a Jedi is learning compassion, patience, grace and Padwanian discipline. But if your child is the quiet type and especially if he or she does not get randomly selected after several tries, I think it is okay to intervene. The Jedi Master can’t possibly see everyone in a large crowd. At some point, it is okay to take matters into your own hands and
simply make it impossible for the Jedi Master to miss your kid. You don’t actually have to hurdle the lower terrace. You can just carry a sign. :)